In Your Next Vacation, Learn How to Conquer Central Mexico

In Your Next Vacation, Learn How to Conquer Central Mexico

Travelers visiting central Mexico (Guanajuato) seem to be either loosey-goosey backpackers or members of the tourist elite who have a lot of experience traveling to odd and unfamiliar locations, as I’ve seen recently.
In my opinion, backpackers (and there’s nothing wrong with being a little loosey-goosey, I might add) are a very adaptive set of people who can, more or less, remain nearly anyplace, under virtually any circumstances, and more readily go with the flow, regardless of what the flow throws at them.
The tourist elite group has the financial means to stay in luxurious accommodations that cater to their every need. This group is willing to spend the money to stay in lodgings that pander to their every desire while also providing a sense of safety and security. Because of their extensive travel experience, this group does not get too alarmed when they come across new and unusual things inside a culture.
What has become obvious to me is that there is a significant segment of the tourist population that is absent. Most of these people are from middle-class families in the United States and Canada who, although having heard about central Mexico, have never been there. They may be interested in checking out central Mexico as a less expensive option to the traditional resort regions of Mexico, but they are apprehensive about traveling to a country where Spanish is the primary language and where they might have a difficult time navigating their way about.
In March 2007, while cruising about the smaller towns in search of story material, we came upon an American lady sitting peacefully on a bench reading a newspaper. She informed us that she and her husband make the time and effort to go to central Mexico in order to get away from the typical Mexican resorts, which are notoriously expensive. As well, she informed us about acquaintances who prefer to spend their vacations in resort regions and would never consider traveling to central Mexico due of the language barrier. 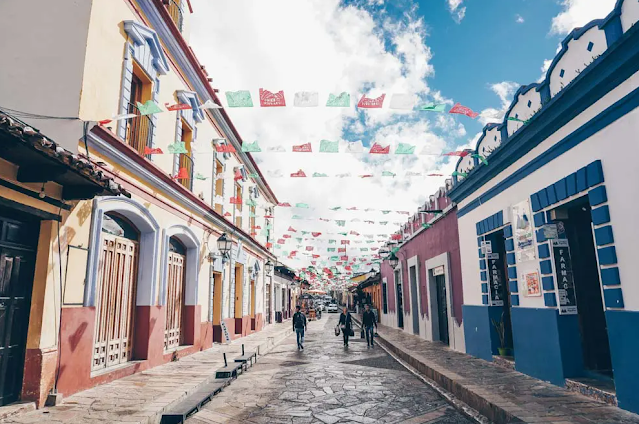 The travel writer, Bill Bryson, and his book, Neither Here Nor There, come to mind whenever the subject of language and tourism comes up in conversation. Despite the fact that he lacked language abilities, this guy traveled across Europe. Nonetheless, he did it and as a result, he was able to write a really hilarious book.
Despite the fact that knowing Spanish is very beneficial for the want tobe monolingual American visitor to central Mexico, it is not always a significant necessity. There has been some tourist meltdowns in Guanajuato, certainly, in the form of Europeans who have magically arrived in the city only to find that “everyone speaks Spanish here.” These all-too-frequent remarks may be seen on a variety of travel discussion forums.
The common assumption is that English will be spoken by natives working in the tourism sector across Mexico. This is not the case. Unfortunately, this is not the case.
It is my opinion that if central Mexico want to attract an increasing number of Americans and Canadians, it should begin the process of becoming multilingual in English as quickly as possible. I recall being astonished to see that so many people in the resort regions of Mexico were fluent in both English and Spanish. They haven’t yet grasped the concept that offering English as a second language would attract more tourists who are willing to spend a lot of money in their businesses.
What most people who would want to vacation in central Mexico don’t realize is that there are methods for getting over their concern of the language barrier. The majority of people do not know that there are alternatives to the ultra-expensive hotels that may easily cost you back $150.00 to $250.00 USD for a single night. We saw this American guy, who, as I previously said, had magically appeared in Guanajuato, suffer a nervous breakdown. Out of desperation, he pulled out his mobile phone and dialed his mother’s number. “I’m turning around and leaving this place…no one speaks English,” he said at one point in the discussion. While it is not true that no one in the town where I live speaks English, I can understand his irritation since English is not commonly spoken in the town where I reside.
The fact that these visitors have ended up in central Mexico is the biggest miracle in my opinion!
It goes without saying that learning a little Spanish may help you overcome this often crippling handicap. There are a variety of home study courses available that may provide you with much more flexibility in the language than you would expect.
Another option is to book a room at one of the high-quality Bed & Breakfasts that are spread around the city. Some of these businesses employ Americans who are fluently bilingual and bicultural in both English and Spanish. Their care and attention will ease your concerns about navigating the city, where you will be hard pushed to locate English-speaking people. It is possible to find Mexican B & B proprietors who are completely bilingual and bicultural, and who can provide you with the same level of peace of mind as well as high-quality lodgings at a significant savings over what you would spend in the resort regions.
I’m certain that this is the best course of action. A number of bed and breakfast establishments in Guanajuato have been around for a long time, and they may cost you back the equivalent of your children’s college tuition. If you have the financial means to pay resort rates and want to do so, the ultra-rich destinations are waiting for you. For those seeking a more affordable, high-quality place with a home-like atmosphere where not only their sleeping and eating needs are met, but also where the owner can educate you on cultural issues and guide you through the rough spots, the smaller, and in my opinion far more versatile, Bed and Breakfasts are the best option.
To be honest, if you want to go out and attempt stretching your holiday muscles by traveling to Guanajuato, you’ll need more than three hots and a cot when your vacation legs start to feel rubbery in a location where Spanish is the primary language spoken by most people.
More Americans and Canadians might go to central Mexico to take advantage of the mind-expanding experience of seeing the site of the Republic of Mexico’s founding, which would benefit both countries. Every step you take in colonial Mexico carries with it a sense of history and culture. This is the location where everything started. Mexico has a lot more to offer than only its resort areas, which are definitely entertaining and provide delicious seafood at reasonable prices. However, the resort areas are not the only thing Mexico has to offer.
There’s a lot more to see in Mexico, and it’s all right here in the heart of it.
Share:
Snowmobile Vacations in Yellowstone National Park on a Tight Budget Why You Should Research Airlines and How to Do So When Traveling by Air